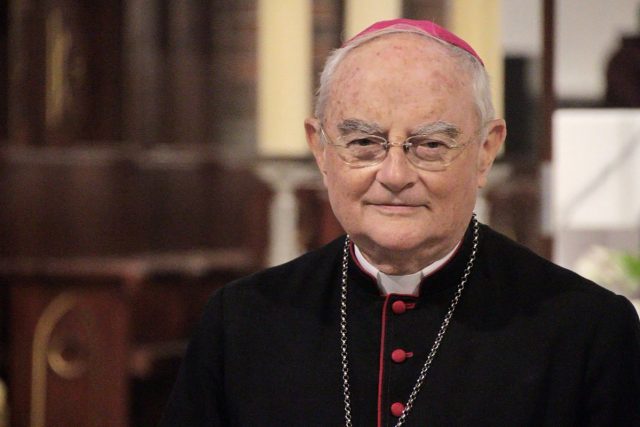 This interview with Archbishop Henryk Hoser, the Apostolic Visitor with a special role for the parish of Medjugorje, first appeared on the official Medjugorje website (medjugorje.hr).

Your Excellency, I thank you for giving us this interview. The world stopped before coronavirus, so can you tell us, do you see something positive, something good that can develop out of this great drama we are living right now?

The epidemics has surprised us with the extend and it affected the whole world and we call it pandemics. In this moment, most of the countries have been touched by this virus, most of the societies too and there is absence of social and economic life. However, on the other side, faithful feel also limitations when it comes to religious practices, churches are closed, there are strict rules and only few people are able to be in a church at the same time. This situation has not been seen before because in the past, regardless of wars or natural catastrophes that affected people they always rushed into the churches and now they cannot. Nevertheless, they can all be at home now and this is opportunity for families to be together, those who did not have opportunity before, due to the busy lifestyle of parents, activities of children, and this all led to many broken family relationships. Many parents did not talk to their children and children did not talk to their parents, brothers and sisters did not meet together, there were no family meals and prayers. This moment is the opportunity for families to be renewed in their lives and this is unique time. Besides all statistics of those who were infected, healed, statistics regarding economy and the future, on the other hand side we have a sign for the whole world. This is all a great shock to all those who seemed to be ruling over this world, for those who created the only ideology that is important today – the ideology of the profit, which was the purpose of the entire world economy and now all those dominating lobbies have been crashed in a certain way. We are going through one great spiritual renewal, that requires of us to reflect on our way of life and our consumption way of life and the civilisation of the garbage that devastates the world, as well as of the ideas that are a sort of a garbage. In this time, we can all return to basics, we can reflect now when we are not able to receive sacraments and when we long for that. This is something that takes place in Medjugorje too.

Pilgrims used to come to Medjugorje throughout the whole year and now they are no longer able, but they can be connected to Medjugorje in their homes or in smaller groups. There is a live streaming service that more than 3 million people follow, which is quite a big number and can we, therefore say that we live some new reality in Medjugorje?

Medjugorje in these days looks empty and there are not many people in the streets, no pilgrims and people of Medjugorje cannot be in the church due to sanitary demands. However, those families are big families with several different generations, and they all pray together every day, particularly the rosary. This Medjugorje liturgy is broadcasted to the whole world too – Holy Mass and Adorations and this is how the connection between Medjugorje, and pilgrims is kept, between all those who are longing for this place and anticipate the time when they would be able to return there.

This time last year, on May 12, we recall the day when Pope Francis approved pilgrimages to Medjugorje. Archbishop, can you recall that event, great for each one of us?

This was such a great joy for us all in Medjugorje and I remember we had a privilege of announcing this statement of the Holy See in Medjugorje church of St. James, patron saint of pilgrims. I will remind you of the content of that statement – there are no obstacles in organising pilgrimages to Medjugorje and all categories of the Church officials, starting with the cardinals, archbishops and bishops, priests from all over the world, all people were allowed to come to Medjugorje. Indeed, in that place people find what they lost in their lives and they encounter someone who waits for the there – God, our Lord Jesus and the Mother of God. This was a great joy that expanded all over the world for it brings the universal role of this shrine where people from all of the continents come. We are happy about this and this reflects the future of Medjugorje that needs to live in the rhythm of the heart of the universal Church.

Looking back at the year that is behind us, how do you see this decision and its fruits?

This decision has brought the visible fruits and there was the increase in the number of pilgrims as well as priests who come with them, there were also many esteemed Church officials, beginning with the Youth Festival and in the following months up to this pandemic. I presume, once this is over, pilgrims would return to Medjugorje, very charismatic place, for it is the place where the light of the Gospel shines – the light of the Christ.

This week is full of Marian events, on May 13 we commemorate the anniversary of Fatima apparitions and the assassination attempt on John Paul II. Do you recall that tragic event, what happened then and where were you at that time?

At that time, I was in missions in Ruanda. This was a tragic news that paralysed us in a way, ArchbishopAndré Perraudin told me that during our meeting in one of the parishes. We all prayed for the healing of John Paul II as we dramatically lived the coming hours and days when he fought for his life in the hospital Gemelli, as well as during his slow and painful rehabilitations. Pope was later on able to return to his daily obligations, but already in the hospital, from his window he blessed all those who prayed for him and stood outside the hospital.

It was John Paul II who said that Our Lady’s hand redirected the bullet that Ali Agce shot at him and this is how he survived as the bullet avoided his vital organs.

Yes, Holy Father was saying that Our Lady redirected the bullet that did not hit his vital organs and this bullet was engraved in the crown of Our Lady in Fatima, for the assassination attempt happened on the feast of Fatima apparitions and John Paul was very devoted to Our Lady, his motto wasTotusTuus Mary – all yours, Mary. He lived the profound Marian spirituality all of his life, something that he received from his home upbringing. While he worked in the quarry, he always had a book of Louis de Montfort on devotion to Our Lady, and later on this was something he developed more and more in his pontificate in the 20th century, all in the spirit of the Second Vatican Council and Lumen Gentium, 8th chapter – this used to be the starting point of his entire reflection. Also, he succeeded another Marian Pope, Paul VI, who was aware that post-council crisis causes escape from the Marian devotions, that suddenly seemed unworthy and irrelevant to the intellectuals of the opened Church and that is why Pope Paul VI released three important documents regarding Marian cult, “Marias cultus.“ John Paul II was entrusting himself to Mary from the very beginning and he often travelled to her shrines, like when he visited Mexico for the first time only to go visit Our Lady of Guadalupe. Later on, he continued to visit Marian shrines in his pontificate and thanks to him, the mosaic of the Mater Ecclesiae was placed on St. Peter’s Square. This all shows how much he loved the Blessed Virgin Mary.

From the very beginning, John Paul was very inclined and interested in Medjugorje, for all the events we discover today as the Marian cult present here in devotion to the Queen of Peace is deeply rooted in Fatima apparitions. Today we recall those events, the anniversary of the apparitions in the valley of peace in 1917, and eight days afterwards, Pope Benedict XV introduced invocation the Queen of Peace in the Litanies of the Blessed Virgin Mary. These apparitions protected our future from the conflicts, invited us to conversion and conversion is the state of peace between God and man – God’s peace in man’s heart. The restlessness is first created in each of us and radiates in a negative way around us. Unless we reconcile with God, with our neighbours, we would not be able to live with the others as with the children of the same God.

Speaking of Fatima, I need to ask you something that people find quite disturbing. Do we know all of the apparitions from Fatima, has all what the Mother of God wanted to convey to us been published?

I think that the mystery is something we discover only partially, in that sense we do not have any absolute certainty, but all that was revealed shows the purpose of these apparitions for the world today especially, since the apparitions take place in the apocalyptic future, in the constant battle between good and evil, constant battle for Christ’s Kingdom, so His opponent, the Prince of this World, would no longer exist.

Let us go back to Medjugorje. Many pilgrims wonder if the Youth Festival and the other events would be held this year?

We are all longing for the Youth Festival, for that was the most important event in the whole liturgical year in Medjugorje, but we depend on this pandemic and its development. If this situation lasts, unfortunately this year we would be able to have only same virtual encounter with Medjugorje, not real when people would be able to come. Now the borders are still closed and the transport does not function, there are no conditions for coming to Medjugorje and most probably the Youth Festival will not be held this year.

When can we expect the final decision regarding the Youth Festival?

Perhaps in the end of June, for people need to have time for preparation, everything needs to be organised in Medjugorje and pilgrims need to have all documents necessary too for this trip and coming to Medjugorje.

Anything you would like to say to our viewers, pilgrims of Medjugorje, friends of this place?

Dear friends of Medjugorje, dear pilgrims and parishioners, I speak to you with a plea to continue living in the spirit of hope, for Medjugorje has an obligation to bring hope to people, God’s hope, for He is the one who leads us all with great love and mercy, who sends us Mother of God so she would bring us all to Him. She, in Medjugorje, has been pointing to Jesus all the time and I ask you all to be those who would sow peace, trust and God’s vicinity in these moments. Please look at your vineyards and olive gardens that remind so much of the Holy Land where Jesus lived. He continues to walk with us throughout the centuries, He sends us His Mother to protect us, for her to be patroness of our inner, family and social peace. We continue to be connected, through the media who are active in these days all the time, all so you would continue to be spiritually connected to Medjugorje, praying for the moment when we would meet there again to thank God for all the gifts we received.

3 thoughts on “New interview with Archbishop Hoser about Medjugorje”